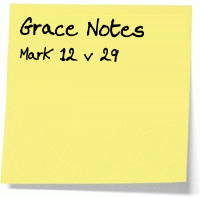 Mark 12:29 "And Jesus answered him, The first of all the commandments is, Hear, O Israel; The Lord our God is one Lord":


The latest series of Downton Abbey has started on Sunday night and once again we can watch all the going on between the Lords and ladies and their servants.  I must admit there is a deep fascination between the interactions of the servants as they live out life in service.


Christ took on humanity and became a servant for us. He showed us in his sinless life how to interact with a fallen and forlorn world. He had compassion on the lost, mercy on the condemned, He healed all those that were sick or oppressed, He loved the unloved and fed all those that were hungry.


We are the temple of the Holy Spirit, Christ in all his fullness dwells in every believer, we are Christ to all those we touch and interact with. When we look at Christ we should be seeing ourselves in the mirror and by His grace and His Spirit we are being changed into his likeness.


As Andrew Wommack explains Christ showed us the way, experienced the world we live in all because he loved us:-


Jesus repeatedly made reference to His deity for which the Jews had sought to kill Him, and yet He quotes from Deuteronomy 6:4, that "The Lord our God is one Lord." There are not two or three Gods and yet Jesus claimed to be God just like God the Father. This union is a great mystery that defies human understanding but can be accepted and believed.


Jesus in His pre-existent state was in the form of God. "In the beginning was the Word and the Word was with God, and the Word was God." Jesus is God manifested in the flesh (1 Tim. 3:16). However, Jesus did not demand or cling to His rights as God. He laid aside His Divine rights and privileges in order to take the form of a servant and be made in the likeness of man. He further humbled Himself by becoming obedient to the Father, even to the point of death. This was the supreme sacrifice that identified Jesus totally with humanity and enabled God to redeem mankind. By dying a criminal's death upon the cross, Jesus fulfilled the Old Testament prophecy of Deuteronomy 21:23, and bore our curse in His own body. This redeemed us from the curse, opened wide God's blessing of justification through faith in Christ, and gave us the promise of His Holy Spirit (Gal. 3:13-14).


The Creator became the creation; the Lord became the servant; the Highest became the lowest. All of this was done because of God's great love for us.
Posted by alan1704 at 06:16