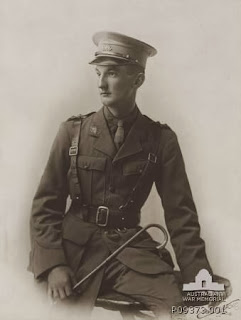 The 9th Australian Brigade suffered bitter losses in its ill-fated attack on Passchendaele on . Before he became one of the officers killed there, Clarence "Jeff" Jeffries had led attacks on German machine-gun posts, capturing several guns and killing or capturing their crews.

Jeffries was just 22 and his family was well known in the region, where he had been a mining surveyor on the state's northern coalfields. After the war his father went to and for a while personally led an ultimately successful search for his grave.
Posted by alan1704 at 18:32