First World War - Why We Joined Up. 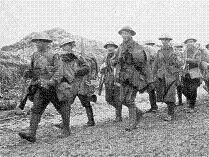 The First World War started on 4th August 1914 and this year marks the centenary.

Over the coming months i will post a few articles that relate to the conflict from different perspectives. These are not academic works but just interesting observations on the Great War. To begin with we have an interesting passage from the book 'Twice in a Lifetime' by M.L.Walkinton. He was just 17 when he enlisted in September 1914 and was soon a rifleman in the Queens Westminster Rifles. Three months later in December he was in the trenches in France. Reflecting years later, this is what he has to say about the reason he joined up.

'Thirteen years have passed, and looking back it is not easy to see just why we were so desperately keen to slaughter a lot of decent Germans. I suppose that we were a normal lot of healthy young men afflicted with romantic minds and large reserves of pent-up energy. Our real need was to rescue beautiful maidens from terrible dragons; but the beautiful maidens were so capable and stand-offish, and all the dragons had been slain long ago, that when the Daily Mail told us that beautiful Belgium had been violated and France was in distress we all rushed to the rescue. But I think we did it for own sakes very largely. The uniforms, the bands, the open-air life and most of all, the feeling that one was a devil of a fellow attracted us irresistibly. We felt, of course , that England was in danger and we did honestly want to defend her, and we knew that it might cost us our lives, but there is no doubt that the wave of patriotic emotion which carried us into the army received much of its impetus from the publicity and glamour of it all.'
Posted by alan1704 at 18:51