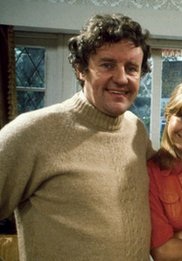 Growing up in the 1970’s there were certain TV sitcom’s that our family watched with religious fervor.  Some Mothers Do Have Them, Are You Being Served and The Good Life.

The Good Life was for my parent’s top of the list, the hilarious antics of Tom and Barbara Good as they gave up the middle class life for self-sufficiency in their back garden.  Pigs, chickens, homemade appliances all things cobbled out of odds and ends added to the great family oriented humour.

Therefore it is with great sadness that I read of the death of actor Richard Briers, who was Tom Good in the sitcom.

Although he was an accomplished stage actor, it is for his Tom Good role that he will be forever treasured in my memories.  The lone man battling against the elements of nature, the system of the world and life. He was the 1970’s equivalent to Richard Hannay,  Shane, and all those other greats that have found themselves battling the system for the oppressed.

I can see him now sitting on his homemade lawn mower / vehicle driving around the middle class suburb. Classic moments.

A few weeks ago i watched an episode of Midsomer Murders where he appeared as the murderous vicar, reaping vengeance on the village inhabitants with an ancient Indian sword.  He had an instantly recognizable and familiar face and was always a pleasure and joy to watch.

Thank you Richard for many great memories and many magical moments,  you were truly a TV great.
Posted by alan1704 at 06:47