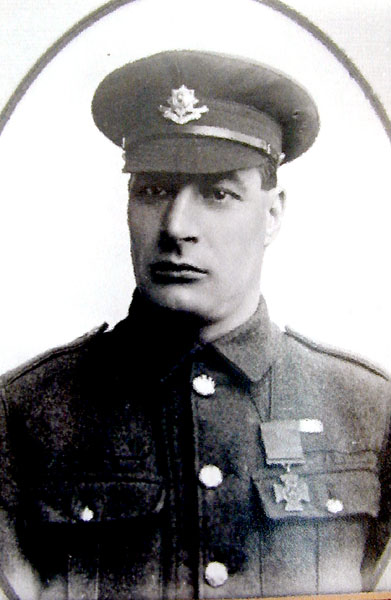 Tom Turrall was 30 years old, and a private in the 10th Battalion, Worcestershire Regiment, British Army during the First World War when the following deed took place for which he was awarded the VC

On the 2nd July 1916 the 58th Brigade attacked the strongly fortified village of La Boisselle and secured a position on the southern face. As the German machine guns were very active it was decided to continue the attack in the night. The troops formed up opposite the village and the order to advance was given at with the 10th Bn, Worcestershire Regiment, and crossing open ground and into the German defensive positions.

When it grew lighter a small group, including Turrall under the command of Lieutenant Jennings, was suddenly fired upon from a hidden German position where was severely wounded and had one of his legs shattered by bullets. Turrall took charge of the situation and dragged his officer into the safety of a nearby shell hole and began to dress ' wounds, using part of an entrenching tool as a splint and one of his own puttees for a bandage. While he worked several bombs were thrown at him as the enemy had seen movement in the shell hole. The bombers were concealed behind a hedge and Turrall managed to kill at least one of them with rifle fire before the enemy withdrew.

However, Turrall could see that there was a mass of Germans attempting to re-take the village in a strong counter-attack. His officer had fainted and there was no point in shooting and so he feigned death, being prodded with bayonets but survived. The enemy counter-attack against the British defences failed. Turrall had to remain until dark in his shell hole and then hoisting up his wounded officer he dragged him back towards the British lines. was a very tall man and his arms were around Turrall's neck and his feet dragged along behind him. The two men were challenged by British sentries but Turrall's English voice was recognised and the two men were allowed back into their lines.

was able to give a full report on Turrall's bravery but unfortunately his wounds were to prove mortal and he died a few hours later at Denancourt field dressing station.

For most conspicuous bravery and devotion to duty ( La ). During a bombing attack by a small party against the enemy the officer in charge was badly wounded, and the party having penetrated the position to a great depth was compelled eventually to retire. Private Turrall remained with the wounded officer for three hours, under continuous and vary heavy fire from machine guns and bombs, and, notwithstanding that both himself and the officer were at one time completely cut off from our troops, he held to his ground with determination, and finally carried the officer into our lines after our counter-attacks had made this possible.

Thomas Turrall was invested with his Victoria Cross by King George V at on .

Following his discharge from the Army, Thomas Turrall attended many regimental functions and was often the guest of honour. He also attended many of the VC and GC Reunions and became a well known and respected figure in Worcestershire and the . On two days before Turrall died he received a visit from two Lieutenant Colonels from the Regiment who found him in 'very good cheer'. Turrall died in , at the age of 78 and was given a full military funeral at the Robin Hood Cemetery, , Warwickshire.
Posted by alan1704 at 06:49