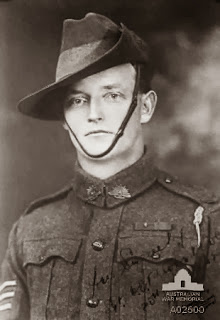 Born in Tasmania, Wally Brown was a grocer in Sydney when he enlisted in 1915. He was in the light horse and the camel corps before transferring to the infantry. A brave soldier, he gained the Distinguished Conduct Medal in 1917.

On 6 July 1918, at Villers-Bretonneux, Brown's party had taken over some newly captured trenches. When told that an enemy sniper was causing trouble, Brown discarded his rifle and picked up two Mills bombs. Running towards the post, he threw one bomb, which fell short, but on reaching the position he attacked a German with his fists and threatened the others with his remaining grenade. They all promptly surrendered.

During the war Brown was twice wounded, and promoted to sergeant. Although married and over-age, he served again in the Second World War. He went missing after the fall of Singapore in February 1942; he was last sighted declaring, "no surrender for me".

Brown was awarded the Victoria Cross, the Distinguished Conduct Medal, service medals for the First and Second World Wars, and the King George VI Coronation Medal.
Posted by alan1704 at 22:37