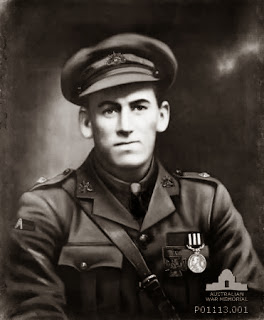 Frederick Birks was born in North Wales, and migrated to Australia in 1913. He held different jobs before enlisting in August 1914. He was posted to the medical corps and served as a stretcher-bearer on Gallipoli; he was wounded in June 1915. In France next year he was awarded the Military Medal for bravery.

Having been selected for officer-training, Birks was commissioned in the 6th Battalion, AIF, in May 1917. On 20 September, during the battle of Menin Road, Birks and a corporal attacked a German pillbox which was holding up the advance; the corporal was wounded but Birks went on, killing those in the pillbox and capturing a machine-gun. Later he led a small party against another strongpoint, capturing 16 men and killing or wounding nine others. The following day, while trying to rescue some of his men who had been buried by an explosion, the brave officer was killed by a shell. He was posthumously awarded the Victoria Cross; the award was accepted by his brother, who was serving in the British army.

Birk received the Victoria Cross, a Military Medal, and service medals for the First World War.
Posted by alan1704 at 19:03