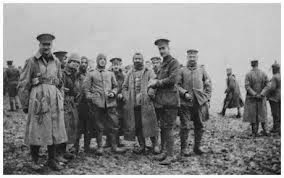 Private M. L. Walkinton, a 17 year old Rifleman in the Queens Westminster Rifles took part in the famous Christmas Truce in 1914. Reflecting back years later, this is what he has to say about that famous event in his book 'Twice in a Lifetime':-

“On a quiet night, when the trenches were near enough, we used to sing to each other, sometimes alternate verses of the same tune like Hail though one despised Jesus and Deutschland, Deutschland liber alles. They often sang their own words to the tune of God Save the King. Then an officer of one side or the other would come and stop it by ordering a few rounds of fire. We used to be sporting and fire high with the first round – and so did Brother Boche. We used to shout remarks to each other, sometimes rude ones, but generally with less venom in them than a couple of London cabbies after a mild collision……

Well, goodwill and good fellowship at Christmas-time were bred in the bone, so to speak and in spite of orders and warnings one kept thinking about it. The way this Christmas feeling persisted is interesting as one of the few victories of the teaching of the Church over the teaching of the State during the whole war. It persisted with us until the word ‘Truce’ crept into conversation. It grew so strong that not a shot was fired on our bit of front after midnight of December 24th/25th until midnight of December 25th/26th.

It was weird and unearthly for everything to be suddenly still. For some time we were suspicious and careful. We were afraid that some low-down trick might be played upon us by those ‘dirty swine’ (a phrase learned from newspapers printed in the far-off security of England – not our own coining). But after half an hour nothing had happened and both sides started singing carols. We wandered about a bit, rather nervously, on the parapet and shouted across to the Germans, who were doing the same. After a time a German who spoke English came half-way across and offered to meet one of our men to arrange a twenty-four hour truce. One or two bold spirits went out to meet him and they shouted an arrangement for no firing for twenty-four hours. Dawn came and with it a return to nervousness. But no one fired. We exposed ourselves a bit and so did the ‘enemy’ and nothing happened, so everybody got up out of both lots of trenches and walked about and shouted and waved.

Then the men of the opposing sides began to drift towards each other, first as far as the barbed wire and then a few of each side scrambled through. Timidly they approached each other – unarmed, of course - until finally a German and an Englishmen met and shook hands to the sound of a happy little burst of cheering. Within a few seconds hundreds of people were shaking hands, laughing, exchanging drinks of rum and cognac, cigars and cigarettes, chocolate, sausages and so on.

I talked to a German-American who seemed a very pleasant sort of lad. He had never been to England actually, though his ship had anchored off Plymouth. We tried talking war, but I found he was full of newspaper propaganda, as I suppose I was, and we couldn’t make any sense of it. He thought that the Germans had made a successful landing in England and were marching on London. I told him that we were expected to beat Germany by Easter and he roared.

After that I think we talked about food and our respective family histories. He introduced me to his battalion sniper who had just received an Iron Cross from the Kaiser. The sniper showed it to me and seemed very proud of it. I tried to beg it, but he gave me a button of his tunic instead! Several people exchanged addresses and promised to write to each other after the war, but I don’t know if any of them did.

Christmas cards from the King and Queen were handed to every man in the battalion; a greatly appreciated gesture.

At some time during the day I went back to our lines and cooked myself some sausage which I had brought back from a local butchers the night before when on fatigue duty in Chapelle D’Armentieres. There was about eighteen inches of it – they didn’t divide it into ‘links’ like they do in England – and it was rather a disappointment owing to my poor cooking. Just before dusk we all returned to our lines and during the night we were relived by the 1st Royal Fusiliers. My platoon spent the next night or two in comfort in some newly-built and unfurnished workmen’s house in Chapelle. We were dry, we were warm and we had uninterrupted sleep. Bliss again!"
Posted by alan1704 at 07:17

Email ThisBlogThis!Share to TwitterShare to FacebookShare to Pinterest
Labels: 1914, Christmas, The Great War