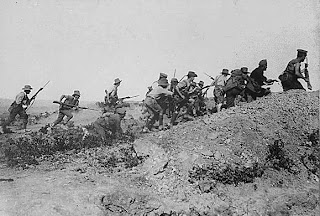 This comes from the book "Over There" With The Australians by Captain R. Hugh Knyvett (Anzac Scout) Intelligence Officer, Fifteenth Australian Infantry.

This great article describes the horror of a  night’s scouting, it’s terrifying how difficult the wire was, “It was a breastwork trench and I climbed up the sand-bags, but tripped over a wire at the top and came down with a clatter.”

"There was one night when I was making a way through the German wire, and had my hand up cutting a strand, when a sentry poked his head over the top and looked straight at me not three yards away. I froze instantly in that attitude but he fired a shot at me which, of course, went wide, being aimed in the dark. He then sent up a flare, but the firing of this dazzles a man for several seconds, and then so many shadows are thrown that I was no more distinct than previously. He went away, returning a minute or two later to have another look. By this time I was feeling quite stiff, but he was quite satisfied that no live man could be there. Had I jumped into a shell-hole, as fear prompted me to do, he would have roused the whole line, and a bomb would likely have got me. However, I thought this would be a good opportunity to take a look into the trench, for I reasoned that this sentry must be alone or some one else would have put up the flare while he fired the shot. Probably the rest of his regiment were on a working fatigue not far away. It was a breastwork trench and I climbed up the sand-bags, but tripped over a wire at the top and came down with a clatter. A red flare went up and I heard the feet of many soldiers running along the duck-boards. I only had time to roll into the ditch at the foot of the back of the parapet, where I was quite safe from observation, when they manned their trench to repel the "raid."

After several minutes when about a hundred rifles, several machine-guns, and a trench-mortar were pouring their fire into No Man's Land, I began to recover my nerve and saw that it would be a good opportunity to mark the position of one of these machine-guns which was firing just above my head. In fact, I could, with ease, have had my hand drilled just by holding it up. I tore a page out of my note-book and placed it in a crevice between the sand-bags, just under the gun. Hours afterward when all was quiet I returned to our own trenches and fastened another piece of white paper to a bush half-way across No Man's Land that I noticed was in line with a dead tree close to our "sally-port," and my first piece of paper. In the morning the artillery observation officer could see these two pieces of paper quite plainly with his glasses, and that trench was leveled for fifty yards. "
Posted by alan1704 at 06:21