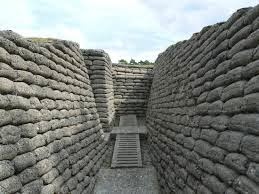 This article comes from the fantastic book “Mud and Khaki Sketches from Flanders and France” by Vernon Bartlett.

This part of the book describes a night in a trench, when Barlett as an officer looks on his men.

Carrying on the theme of letters to the soldiers he describes the ‘buzz’ as the letters arrive and how the letter from home to ‘Denham’ arrives too late.

"I wander on my rounds to see that all the sentries are on the alert, and, suddenly, nearly fall over a man lying face downwards along the bottom of the trench. "Here, you can't sleep here, you know; you give no one a chance to pass," I say, and, for answer, I am told to "shut up," while a suppressed but still audible giggle from Private Harris warns me that the situation is not as I had imagined. The figure in the mud gets up and proves to be an officer of the Engineers, listening for sounds of mining underneath us. "I think they're at it again, but I'm not certain yet," he says cheerfully as he goes off to his own dug-out. I, in turn, lie down in the mud with my ear pressed to the ground, and I seem to hear, far beneath me, the rumble of the trolleys and the sound of the pick, so that I am left for the rest of the night in the uncomfortable expectation of flying heavenwards at any moment.

A buzz of voices which reaches me as I return from a visit to a working party informs me that the one great event of the night has taken place—the rations and the mail have arrived and have been "dumped" by the carrying party in a little side trench. Before I reach the spot a man comes hurrying up to me, "Please, sir," he says, "young Denham has been hit by a rifle grenade. 'E's got it very bad." Just as I pass the side trench, I hear the sergeant who is issuing the letters call: "Denham. A letter for young Denham," and someone says, "I'll take it to him, Sergeant, 'e's in my section."

But the letter has arrived too late, for when I reach the other end of the trench Denham is dead, and a corporal, is carefully searching his pockets for his letters and money to hand over to the platoon commander. They have carried him close to the brazier for light, and the flames find reflection on the white skin of his throat where his tunic has been torn open, and there is an ugly black stain on the bandage that has been roughly tied round him. Only one man in millions, it is true, but one more letter sent home with that awful "Killed" written across it, and one more mother mourning for her only child.

And so the night draws on. Now there is a lull, and the sentries, standing on the fire platforms, allow their heavy lids to fall in a moment's sleep; now a sudden burst of intense fire runs along the line, and everyone springs to his rifle, while star shells go up by dozens; now a huge rumble from the distance tells that a mine has been fired, and we wonder dully who fired it, and how many have been killed—dully only, for death has long since ceased to mean anything to us, and our powers of realisation and pity, thank God! have been blunted until the only things that matter are food and sleep."

After education at Blundell's School Bartlett was invalided out of the Army in World War I. As a journalist he worked for the Daily Mail, and was a foreign correspondent for The Times. In 1922 he was appointed director of the London office of the League of Nations. In 1933 he joined the News Chronicle, and was its diplomatic correspondent for 20 years).
Posted by alan1704 at 06:38

Email ThisBlogThis!Share to TwitterShare to FacebookShare to Pinterest
Labels: Remembrance