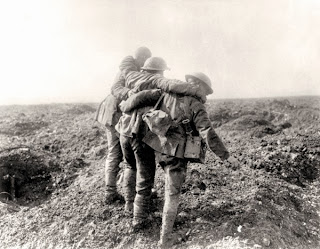 I thought I would publish the famous poem ‘Dulce et Decorum Est’ by the great Wilfred Owen.

It was as an impressionable 18 year old that I first read this poem during a college English Literature class. The poem and the college course changed my life and I have been interested in the First World War ever since.

Owen makes the whole dimension of the war come alive with the full horror of it all. It is amazing the way he involves the reader into the horrific world by using the word ‘you’. No longer are you looking in at a scene, you become part of it.

“DULCE ET DECORUM EST” is the first words of a Latin saying (taken from an ode by Horace). The words were widely understood and often quoted at the start of the First World War. They mean "It is sweet and right." The full saying ends the poem: Dulce et decorum est pro patria mori - it is sweet and right to die for your country.

You can make up your own mind, whether Owen thought the slow agonizing death from drowning in poison gas was a “sweet and right thing”!

Bent double, like old beggars under sacks,
Knock-kneed, coughing like hags, we cursed through sludge,
Till on the haunting flares we turned our backs
And towards our distant rest began to trudge.
Men marched asleep. Many had lost their boots
But limped on, blood-shod. All went lame; all blind;
Drunk with fatigue; deaf even to the hoots
Of tired, outstripped Five-Nines that dropped behind.

Gas! Gas! Quick, boys! – An ecstasy of fumbling,
Fitting the clumsy helmets just in time;
But someone still was yelling out and stumbling,
And flound'ring like a man in fire or lime . . .

Dim, through the misty panes and thick green light,
As under a green sea, I saw him drowning.
In all my dreams, before my helpless sight,
He plunges at me, guttering, choking, drowning.

If in some smothering dreams you too could pace
Behind the wagon that we flung him in,
And watch the white eyes writhing in his face,
His hanging face, like a devil's sick of sin;
If you could hear, at every jolt, the blood
Come gargling from the froth-corrupted lungs,
Obscene as cancer, bitter as the cud
Of vile, incurable sores on innocent tongues,
My friend, you would not tell with such high zest
To children ardent for some desperate glory,
The old Lie; Dulce et Decorum est
Pro patria mori.


For more information on the poem here is an excellent article by Nicole Smith:
"Dulce et Decorum Est" by Wilfred Owen and the Transition of History
Posted by alan1704 at 13:03