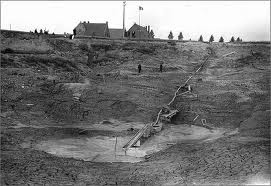 Draw near-draw near, brave soldier!
Through the darkness to my side draw near!
Here I wait who e'er may chance,
Dreaming darkly, dreaming deep,
And my cruel musings creep
O'er my face as trench flares dance;
Cold is my heart, O soldier!
As thy lips are cold with fear.

Beware! beware, good soldier!
Others such as thou, have come this night,
In the dark, the rain and sleet,
Pressing each upon his foe....
Saw, to late, my face aglow,
Felt my fingers clutch their feet;
Dark are my depths, good soldier,
But thy fevered eyes are bright!

Look down! Look down, poor soldier,
Where the bubbles of decay arise:
See them, note them-how they lie,
As they grappled, as they fell:
Foes in life-in death as well,
Foot to foot and eye to eye;
The pestilence I send thee, soldier,
Is the hate that dimmed their eyes.


(Henry Weston Pryce was born at Woolway Station in Monaro, New South Wales in 1891. His occupations included salesman, insurance agent, clerk, soldier and journalist. He contributed verse and stories to Australian literary journals for several years. Pryce joined the 9th Machine Gun Company of the A.I.F. on 16 June 1916 and sailed from Melbourne in October 1916. He returned to Australia on the 25 November 1917. Both his brothers died in the war. Pryce joined the staff of the Sydney Sun. He died in 1963).
Posted by alan1704 at 08:50

Email ThisBlogThis!Share to TwitterShare to FacebookShare to Pinterest
Labels: Remembrance