From A Park Bench - The Bramble Bush 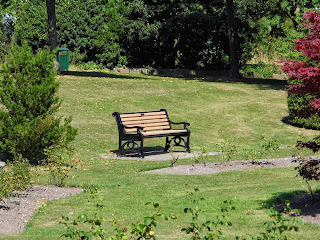 A few years ago I faced a challenge of monumental proportions. On the surface it seemed that this challenge would be a two minute job, just a little exertion on a sunny Saturday afternoon.  But a small insignificant Bramble Bush became an evil, back breaking plant that would not be removed.

This Bramble Bush had taken residence in our front garden and had grown to become a little problem with its thorny tentacles causing trouble and destruction.  I thought it would only take a few goes with my secateurs, but after two hours of pushing, pulling, cutting, chopping, I had to call in the cavalry to get rid of the plant. My father-in-law arrived and with his industrial strength chopper’s, the evil Bramble Bush was defeated and victory was achieved.

When we looked at the remnants of the bush, it was obvious that the roots of the plant were greater than the plant.  Its strength was in its roots, the hidden, unseen source of all its glory and just as that bush’s roots provided life, stability and nourishment for the bush, so also a revelation of God’s love is the foundation on which everything on our life in Christ is built.

We receive God’s love and grace in and by our roots which reach deep into the vast heart of God. His life is our life, his power is our power, his faith is our faith, and his glory is our glory.

As we understand and are grounded in our Fathers love we comprehend all that God’s has freely given us by His grace.
Posted by alan1704 at 06:50

Email ThisBlogThis!Share to TwitterShare to FacebookShare to Pinterest
Labels: Bramble Bush, From A Park Bench, Grace