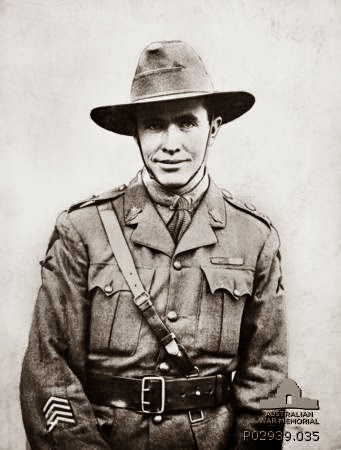 Edgar Towner enlisted in 1915 and soon established himself as an outstanding soldier. Fighting in France, in the 2nd Australian Machine Gun Battalion, he was commissioned, won the Military Cross and was twice Mentioned in Despatches before receiving the Victoria Cross for the attack on Mont St Quentin, on 1 September 1918. In the battle, constantly under fire, he undertook dangerous reconnaissance and bravely led his machine-gunners. At one point he personally captured a machine-gun and turned it on the enemy. After 30 hours' fighting he was evacuated, wounded and exhausted.

After the war Towner returned to rural , but served again in the Second World War. A pastoralist at home in the bush, he was a life-long bachelor.
Posted by alan1704 at 18:12