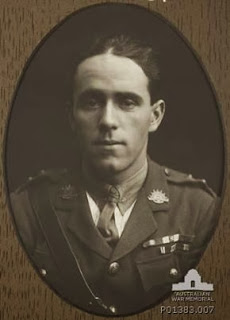 Lieutenant Joseph Maxwell, 18th Battalion, performed the action that resulted in him being awarded the Victoria Cross, on the fortified 'Beaurevoir line', near Estrees, France.

Joe Maxwell was an apprentice boilermaker before enlisting in Sydney in February 1915. He served on Gallipoli and the Western Front. Rough, tough, and exceptionally brave, he was commissioned in late 1917. In little more than a year he was awarded the Distinguished Conduct Medal (DCM), the Military Cross and Bar, and the Victoria Cross.

On 3 October 1918, near Estrees, Maxwell took over when his company commander was wounded and captured a machine-gun. He then attacked another post. Later he was briefly taken prisoner. During a barrage, he managed to pull out a concealed revolver, shoot two of the enemy, and escape....

Although aged just 22, Maxwell became the second most highly decorated Australian. He later worked in a variety of jobs. His book, Hell's bells and mademoiselles (published 1932), became a war classic. Using an alias, he enlisted in the Second World War but was discovered and discharged.

Maxwell was awarded the Victoria Cross, the Military Cross and Bar, DCM, service medals for the First World War, and coronation medals for King George VI and Queen Elizabeth II.