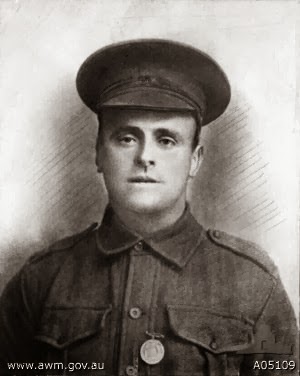 Ernest Albert Corey served as a stretcher bearer during the First World War. He enlisted in the Australian Imperial Force on 13 January 1916, and was allocated to the 55th Battalion, where he was initially posted to a grenade section before volunteering for stretcher bearing duties. In 1917 he was twice awarded the Military Medal for his devotion to duty in aiding wounded soldiers, and twice again in 1918; becoming the only person to be awarded the Military Medal four times.

The award for Corey's Military Medal was published in a supplement to the London Gazette on 18 July 1917. His citation read:

"During the enemy attack on front line facing Queant on 15th May 1917, Pte Corey, whilst acting as a stretcher bearer, showed great courage and devotion to duty. Although under direct enemy observation, he carried out his duties continuously for 17 hours without rest, and in a manner worthy of the highest commendation. Although an untrained stretcher bearer, he, together with the rest of the bearing party saved by first aid the lives of seriously wounded men. The Commander of the 54th Bn wrote an appreciation for the help given, and specially mentioned the stretcher bearing party for their good work."

Originally recommended for the Distinguished Conduct Medal, Corey was instead awarded a Bar to his Military Medal. The award was published in a supplement to the London Gazette on 14 January 1917. The citation for his first Bar read:

"This stretcher bearer showed great courage, devotion to duty and untiring energy during the attack on Polygon Wood on the 26th September 1917. The greatest danger did not deter this man from doing his duty when his services were required, and he tended the wounded and carried them to places of safety continuously throughout the engagement, often under very heavy artillery and machine gun fire. Throughout the whole operations he set a fine example of bravery and coolness to all ranks."

Corey was again originally recommended for the Distinguished Conduct Medal, but was awarded a second Bar to his Military Medal. The award of the second Bar was published in a supplement to the London Gazette on 13 March 1919.

The citation for his second Bar records:

"For conspicuous gallantry and devotion to duty during operations at Peronne on 1st and 2nd September 1918. This man who is a stretcher bearer, dressed and carried wounded of several units throughout the whole of the operation. Although the enemy artillery and machine gun fire was exceptionally heavy, this did not debar this man from carrying on. He worked continuously and arduously and was the means of saving the lives of many of the wounded. He was most unselfish throughout and cheerful at all times and under all circumstances. His careful handling of the wounded and his knowledge of first aid helped greatly to relieve their sufferings; throughout the operations he set a fine example of courage, coolness, determination and devotion to duty, under heavy fire."

The third Bar to his Military Medal was published in a supplement to the London Gazette on 13 June 1919. The citation for his third bar records:

"For conspicuous gallantry and devotion to duty as NCO in charge of Battalion stretcher bearers during an attack on the Hindenburg Line north of Bellicourt on 30 September 1918. Although enemy machine gun and shell fire were intense, this gallant NCO directed the operations of the Battalion stretcher bearers with the utmost skill and bravery. Regardless of personal danger, he, on numerous occasions although the enemy were firing upon him and other bearer parties, attended to men and carried them from the most exposed positions. His efforts were untiring and he set a splendid example to all ranks until he was severely wounded. It was mainly due to his magnificent work that the wounded were safely removed from the danger zone."