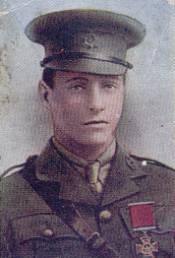 I am re-posting this article on William Barnsley Allen after I read an excellent blog post by Sue Light at This Intrepid Band. Ms Light writes about the unsung hero’s – those men and women who lived through the war and died in obscurity. Their names are not remembered on any war memorial.

I came across William Allen’s grave whilst on holiday a few years ago and I am just amazed at his bravery and action.

He is one such ‘Unremembered’ hero, who selflessly risked his life and health to save his fellow soldiers. 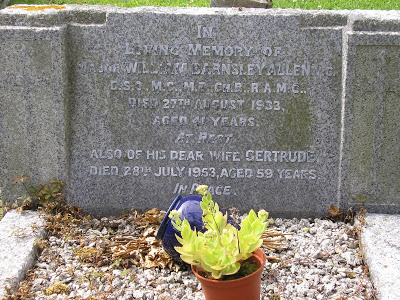 William Barnsley Allen was born in on , and was the only son of Percy Edwin Allen and Edith Allen (nee ). He was educated at and . He gained the Gold Medal for Pathology in 1913 and has also won three bronze medals; M.B., Ch.B, Kaye Scholarship and Second Class Honors.

He joined the Army on being gazetted Lieutenant on that date and was promoted Captain on (T.F.). In May 1916 at Gainsborough he married Mary Young (“Mollie”), younger daughter of W. Y. Mercer, Esq., of Gainsborough.

In August of that year he gained the Military Cross. Near Mesnil, , on , his splendid behaviour under fire in the circumstances mentioned below gained him the Victoria Cross (London Gazette, 26th October, 1916):

“For conspicuous bravery and devotion to duty.

When gun detachments were unloading high explosive ammunition from wagons which had just come up, the enemy suddenly began to shell the battery position. The first shell fell on one of the limbers, exploded the ammunition and caused several casualties.

Captain Allen saw the occurrence and at once, with utter disregard of danger, ran across the open, under heavy shell fire, commenced dressing the wounded and undoubtedly by his promptness saved many of them from bleeding to death.
He himself was hit four times during the first hour by pieces of shell, one of which fractured two of his ribs, but he never even mentioned this at the time, and coolly went on with his work until the last man was dressed and safely removed.

He then went over to another battery and tended a wounded officer. It was only when this was done that he returned to his dug-out and reported his own injury.”

In July, 1917, he was awarded the Bar to the Military Cross and was invalided to on 22nd July. On , he was made acting Major. On , he was wounded for the third time and invalided for the second time to , and awarded the D.S.O. on this date. He served in three years and two months; was transferred to Regular R.A.M.C., and dated back to Captain on , which rank he held to the conclusion of the war. 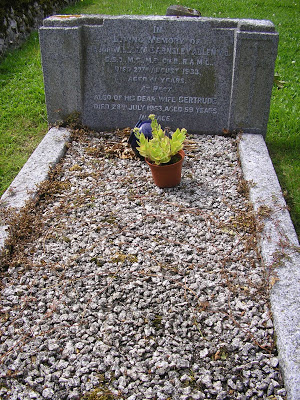 He died on at Bracklesham, Near Chichester, Sussex and is buried at . 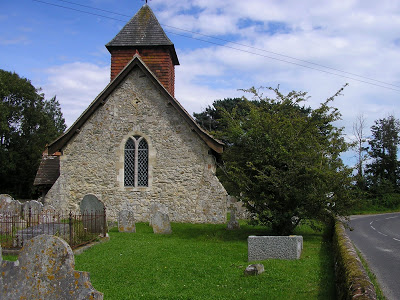