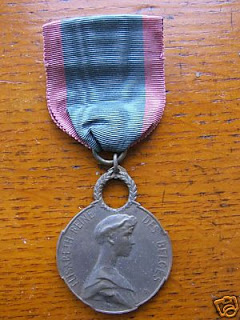 Elizabeth Macdonald (nee Morgan) along with Dr. Bruce, Medical Superintendent of the , Fulham, helped establish the Belgian Refugee Depot at Earl’s Court in October 1914. She was awarded the ‘Medaille de la Reine ’ for her humanitarian work.

She died in 1951, the British Nursing Journal honoured her with the following obituary in May 1951, page 45.

“AFTER MANY MONTHS OF ILLNESS, patiently borne, Elizabeth Macdonald (nee Morgan), widow of the late Rev. D. Macdonald, passed to her rest on .

She received her training at Marylebone Infirmary, London, and after some administrative experience at the London Fever Hospital, was appointed Matron of the Northern Hospital, Winchmore Hill, London, N., an office she held with distinction for more than twenty years, and which she relinquished in 1917, on her marriage to the Rev. Duncan Macdonald, then Minister of the Established Church of Scotland, at Swinton, Berwickshire.

Elizabeth Macdonald was an able supporter of the Scheme, inaugurated in 1907, for State recognition of Fever Nurses, and ever an eager worker, she became the first Secretary of this progressive movement for the benefit of the sick; burning much oil in this cause.

In 1914, in recognition of her splendid work, when she was deputed, in the First World War, to take office in an organizing capacity at the Belgian Refugee Camp at Earls Court, she received from the late King Albert of the Belgians, the Queen Elisabeth Medal (Médaille de la Reine Elizabeth) and one hundred pounds.

In her last and surprisingly legible letter, written only a few weeks before her death, alluding to her impaired sight, crumpled hand, and the loss of many dear friends, but always looking for the bright side, she remarks :

“However, I’m very happy here, only lonely!” How sad for her who loved life and people!

It is a great consolation to know how grateful she was end how comforted by the care and kindness bestowed on her by the Matron and Staff of the beautiful Crail Nursing Home, .

We who knew her feel deeply, that in the passing of Elizabeth Macdonald’s bright and courageous soul, the world, is, indeed, the poorer."
Posted by alan1704 at 22:22